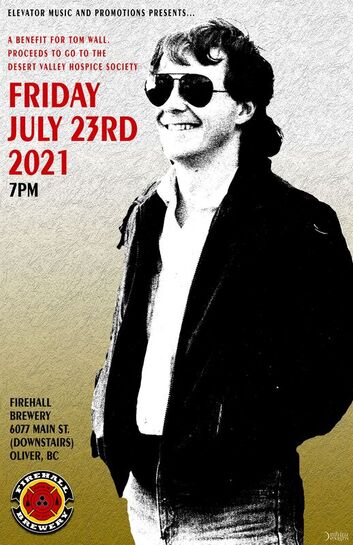 A successful benefit on July 23rd for Desert Valley Hospice Society.
Thank you to Ben Abel, Firehall Brewery and all the friends and family who attended to play tribute to Tom Wall.

"Uncle" Tom Wall, a local musician and friend to many, passed last November at the age of 60 after fighting a courageous battle against Pancreatic Cancer. A tribute concert for Tom will be hosted by his nephew, Ben Abel. Tom and Ben performed together at the Firehall Brewery in Oliver and other venues.

Tom was born in the Okanagan Tom returned to the Okanagan in 2004 to care for his ailing parents, Ben and Delia.  He continued to stay in the Okanagan after  their passing. He helped friends and family and  tenants at the Elks Golden Villa in Osoyoos B.C. where he lived most recently.  He maintained relationships with many high school, university and other friends he met  through out his life, and also those he met through his love of music, writing, art and caring for others.