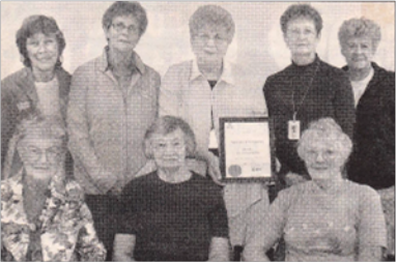 Members of the newly formed Desert Valley Hospice Society, Left to Right, Back Row: Elizabeth Mann, Margaret Dietrich, Trudy Demorest, Jeannette Stapleton, Elaine Madaire. Front Row: Lois Clark, Mary Clare Bednarik, Kay Yuckin. Missing: Adeline Frey, Merrill Bjerkan and Trish Soare.
In 2005, a group of hospice volunteers saw a need and discussed the practicality of starting a society in order to accumulate and direct fundraised dollars as the new society saw fit.  The practice at the time was for funds to be directed to the hospital’s foundation. On August 25, 2006, the society was formed under the name, Desert Valley Hospice  Society, with four directors at the helm: Trudy Demorest, President; Kay Yuckin, Vice President; Jeannette Stapleton, Treasurer; and Merrill Bjerkan, Secretary.
​
In January 2007, the Society became a registered charity.  The Society’s goals at the time were to raise awareness around hospice palliative care, and to fundraise to build a freestanding hospice house. The Society had success in fundraising through  different events including large annual events such as the Hike for Hospice Palliative Care, and an annual wine & cheese gala. Smaller events included membership drives, car washes, and a fashion show. From the beginning, the communities of Oliver, Osoyoos, and Okanagan Falls were very supportive, with many businesses and organizations donating funds for the events.

In 2011, the DVHS Board of Directors recognized the critical importance of developing a Strategic Plan to guide the work of the Society. Without a strong framework from which to work, the Board believed it would struggle to achieve the Society’s mission and values. The Board engaged a consultant to help establish the Strategic Plan. As part of the first phase of the project, an assessment of the current end-of-life and palliative care services in the South Okanagan local health area was conducted. The state-of-care was measured against Provincial and Interior Health expectations. In 2012, a three-year Strategic Plan was completed and a service contract between DVHS and Interior Health was signed,  allowing Desert Valley to provide hospice volunteer programs within the Interior Health region.

One of the key strategic objectives included in the Strategic Plan, was to establish and maintain a Supportive Care Centre from which the Society could operate. With the support of the provincial government and BC Housing, Desert Valley Hospice Society secured an agreement effective September 1, 2014 to operate a Supportive Care Centre at 22 Jonagold Place in Osoyoos. The building houses the administrative offices and provides meeting space for the board, its committees, hospice volunteer training, continuing education, grief and bereavement support,  dementia caregiver support , and other programming and services.